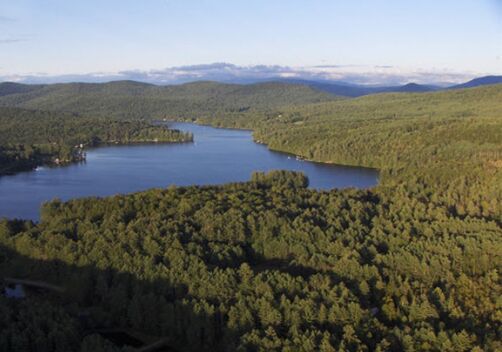 Lake Fairlee phosphate - too much of a good thing
The problem - phosphate levels in the water have been steadily climbing.

Lake Fairlee received a score of POOR in the latest assessment of its health in 2020. According to the Lake Scorecard its condition seems in danger of further deterioration. The problem - phosphate levels in the water have been steadily climbing. It also scored poorly for condition of its shoreland and lake habitat and for presence of invasive species. 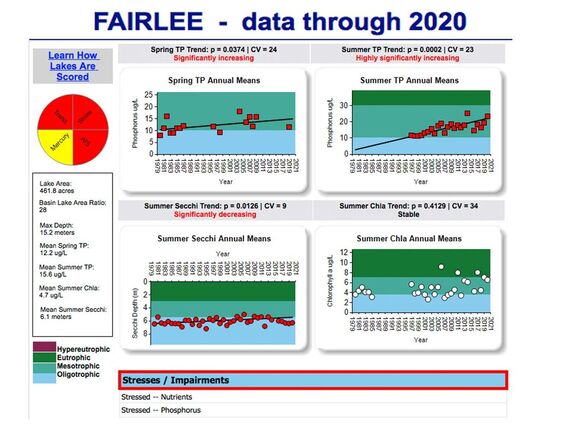 TP = Total Phosphate; Secchi Trend = turbidity; Chla = chlorophyll
Phosphate in itself is not bad. In fact it is essential to all living things, including the building of DNA, the transfer of energy within cells that keeps life itself ticking along, the formation of our bones, and the growth of plants. But when it comes to lakes, too much phosphate is harmful.  Phosphate availability in lake water is what controls the growth of plants, including algae that sometimes make the water cloudy. When phosphate levels rise, so does growth of algae and other plants. It’s just like fertilizing a garden. Algae are mostly harmless. The main problem is when algae and plants die off in vast quantities. Decay sets in, driven by teeming hordes of microbes that consume the oxygen in the water. Low oxygen levels are harmful to fish and other aquatic creatures. That’s when stagnant conditions appear. Some algae relatives, like the photosynthetic cyanobacteria, can be toxic depending on the species although the toxic ones have not appeared in Lake Fairlee.

The Lake Scorecard is a product of the Agency of Natural Resources’ Vermont Lakes and Ponds Protection program (VLPP). The State measures phosphate in the spring, during “lake spring turnover” - the cycling of shallow and deep water caused by the melting of surface ice in spring. When meltwater reaches 39 degrees F, or 4 degrees C, it is at its most dense (unlike most other liquids) and the surface water sinks, displacing deeper water to the surface.  This circular current causes mixing of water and brings oxygen to the lake depths. It also evens out the distribution of nutrients like phosphate that accumulate at the bottom with decaying matter. Therefore the total phosphate at spring turnover indicates the average phosphate content of the lake. This value (Spring TP) has been climbing slowly ever since measurements began. However, the lake is still considered “mesotrophic” meaning it has a intermediate level of nutrients and ability to support the growth of algae.

There’s a second measurement, Summer TP (total phosphate) influenced by how much phosphate has entered the lake since the spring measurement. This number has increased at a worrisome rate recently. As a result the summer lake is approaching the “eutrophic” state, meaning a nutrient-rich lake that supports lush growth of algae. Consistent with this, the amount of chlorophyll, a signature plant compound, shows an increasing trend in summer.

Notably, other Vermont lakes that are scored through the VLPP did not show a summer increase in phosphate levels. Over 100 lakes in Vermont are monitored through the program.

The Lake Score Card rating of “poor” alarmed the Lake Fairlee Association, a residents’ group that oversees the lake. It prompted them to form the Water Quality Action Committee (WQAC) that asked state experts for advice. The recommendation was to sample the tributaries entering the lake for phosphate. The WQAC  learned how to collect water samples and send them to the state laboratories for analysis. In 2020 they tested 5 tributaries at 5 different times.

The results were interesting and demonstrated that certain activities on land correlated with a rise in phosphate in the streams. There was a house construction and regrading of land near one stream that summer. The phosphate in that stream increased and later fell after completion of the project.  Silt runoff from excavation and roads is a known cause of phosphate pollution because phosphate minerals are a common component of soils and rocks. Illustrating this, Lake Morey experienced a sudden jump in phosphate levels fifteen years ago, coincident with an 1-91 reconstruction project making huge cuts uphill from the lake. It was considered serious enough to warrant treating the lake with alum to make the phosphate insoluble and unavailable to algae.

A spike of phosphate appeared in another Lake Fairlee tributary in August and September, concurrent with cows and horses being pastured by the stream on two upstream parcels. The animals had free access to the water but the stream banks were subjected to manure deposition and higher than normal wear and tear from hooves. Soil and bank erosion have been identified as significant contributors of phosphate. Manure may contain up to 25 pounds of phosphate per ton, most of it in fairly soluble form.
​
However, coincidence is not the same as causality and before jumping to conclusions other possible sources should be explored. For instance, failing septic systems have been observed in the watershed and would warrant examination were it not for their protection by private ownership. Beavers, geese and other animals may deposit their wastes in the water too.

Waterside lawns are another possible contributor. Lawns are compacted and impervious, compared to spongy, humus-rich woodland soils that would normally absorb runoff before it enters the lake. The presence of many lawns and other shoreland damage is reflected in the “poor” score for Shoreland and Lake Habitat. If a lawn has been treated with fertilizer its runoff becomes especially polluting since fertilizer always contains some phosphate.
​
The WQAC have attracted an ally, Oliver Pierson, the VLPP program manager who was a former camper on Lake Fairlee and learned of the lake’s issues. He is providing additional suggestions and education on phosphate monitoring and control. WQAC will continue their water sampling this year.